Ventilation is the process of airflow entering a system, flowing through the system, then exiting the system. Volumetric airflow, commonly known as “CFM” or “m3/h”) is important because this is what feeds the airflow. The more air in, the more air out, and in ventilation, you want to maximize the “air out” part! When we test for fan effectiveness, measuring the velocity of air exiting a system is something we always do, because, in the simplest terms, that’s the “work” being done. Airflow into the system is also important much of the time in that the higher the volume, the more clean, cool air is introduced into the structure.

Positive pressure ventilation tries to maximize the airflow discussed above while driving up pressure inside the structure. When a pressure differential is present, there will always be air movement flowing from high pressure to low pressure until the pressure in the structure equals the external atmospheric pressure. Higher pressure inherently results in increased airflow as it naturally tries to equalize itself. When looking at pressurizing the structure, good entrance and exit points must be selected. Things such as the size of openings, external wind speed and direction, and pressure loss points (structural leakage) are examples of things to take into consideration with respect to the capabilities of your fan.

The ultimate size matters debate… performance. Go big or go home!
This couldn’t be more correct when it comes to fan performance. The bigger the stream, the greater the flow.

A larger fan blade produces a larger jet stream. A larger Jetstream creates higher entrainment, and higher entrainment equals higher pressure in the structure. Increased pressure equals increased airflow velocity at the exit point, so you’re ventilating more quickly
.
A firefighter’s job is hazardous, there is no need to saddle them with an underperforming tool. It is not uncommon for a firefighter to risk their life while in the line of duty. After doing the math, it turns out that the less time these brave men and women have to spend at the call, the better. Seconds matter and things happen quickly in the fire industry.

Underperformance can allow things to slip away and get out of control. Having tools that not only get the job done but provide the control to get the job done quickly and effectively lets our first responders get home earlier. Increased performance provides the control necessary to finish the job quickly and effectively, and for this reason, size matters. Exponentially.

BlowHard has raised this bar on performance standards with the new “High Flow Jet” series fans that utilize an expanded Jetstream. Our High Flow Jet technology has increased the area of the Jetstream produced with the same sized blade by nearly 150%, while significantly reducing the footprint of the fan. The result is an ultra-compact fan that significantly reduces truck storage requirements while maximizing portability and increasing performance. High Flow Jet provides superior control, gets the job done in less time, and gets our first responders home more quickly.

To summarize: Use BlowHard fans, Go home early. Size matters, because YOU matter. We believe that high-performance tools will impact the performance of your team. 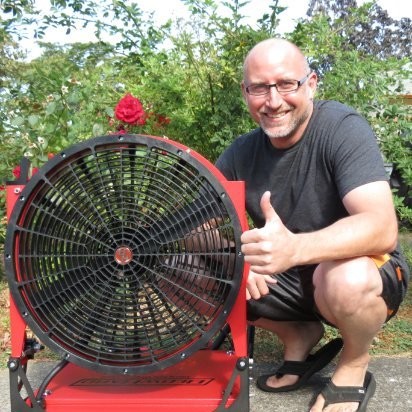